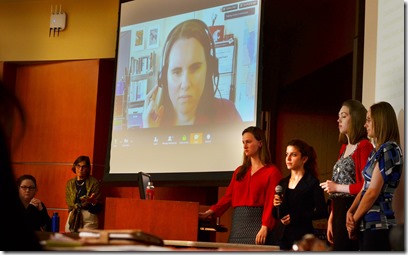 On April 8, she sent her teenage daughter to a Comicon convention, her husband to visit his brother, and the dog on a doggy playdate. The only thing she forgot was to close the windows.
That became important about 5:15 p.m. that day, when WSU Global Campus student Kari Whitney learned she and her team had won the university’s Global Case Competition. She let out a piercing squeal. “My windows were open,” she said, “and I can only imagine what the neighbors might have thought!”
The annual Case Competition brings together five teams of WSU students to solve a pressing problem. Each team comprises five students. This year’s focus was arbitrary detention in the U.S., and the top prize was a trip to Geneva to present solutions to United Nations representatives.
More...      Kari, a humanities major, presented online from her home in Tacoma. WSU Global Connections, which helps online students participate in WSU activities, livestreamed her segment into a packed WSU Pullman auditorium, and over YouTube.
Most teams focused on immigrants and refugees. Kari’s team, Dignity Before Detention, looked at the inequity of jailing the poor because they couldn’t afford small fines, or to rent an ankle monitor.
“Since my contributions would be webcast,” Kari said, “I scripted myself and rehearsed repeatedly in front of a camera, occasionally sending a recording to my teammates for critique.”
During her time at WSU Global Campus, Kari has also been a student senator, and won a WSU Center for Civic Engagement award for writing about food bank clients. She’s highly organized, and like most Global Campus students, skilled at using technology to communicate.
“Kari was incredibly effective,” said teammate Margaret Wyckoff. “Once our connection went out. While I looked at what we were going to cover, she made an entire video of her part, uploaded it to YouTube and sent it to us. And it was really good.”
Teammate Kasey Markland said Kari was expert at collaborating over the Internet. “She would do the presentation in a way where we could see her, the presentation and her comments simultaneously.”
Kari heard about her win from the YouTube livestream. After startling the neighbors, she immediately texted her husband and daughter: “I'm going to Geneva!!!”
Her husband was delighted, but her daughter, Helen, was overjoyed. “We’re nothing if not a practical family,” Kari said. “Helen was ecstatic that my travel to Geneva might result in the appropriation of Swiss chocolate for her.”

I am Ellen Lutz, next in line to visit with all you Global Campus students here in this blog! I graduated from WSU Global Campus (then the Distance Degree Program… a.k.a. DDP) in 2007 with a BA in Social Sciences. Since that time, I have remained active in WSU’s online education community as a Virtual Mentor (VM). WSU’s DDP gave me the opportunity to earn a degree I would not have otherwise achieved and working as a VM has given me a way to pay that gratitude forward.

Three weeks ago you met Assistant Lead VM Alina Zollfrank, with her wonderful introduction to the VM program and ways to build community within the virtual classroom. Today, I am going to take a different route and share with you a tip that I hope will be useful to you as you work in Blackboard.

At least a couple times each semester, the issue of those pesky, difficult to read posts comes up. You know the ones where you have to scroll left to right to read everything? They are both fru…

Hi! Diane Allen here, waving Hello! I'm one of the Global Campus Virtual Mentors who has been with the program close to ten years. As a VM, it’s my job to answer your questions and make your online learning experience as smooth as possible.

Many of the questions VMs get concern formatting issues in discussion posts. Read on to learn some best practices for avoiding formatting problems and how to fix some common issues when they do happen.

Have you ever experienced the frustration of typing a long post directly into Blackboard Learn only to lose it due to one or two wrong keystrokes or a network blink?

Instead of typing directly in Blackboard Learn, compose posts using word processing software such as Microsoft Word, Pages or LibreOffice or better yet a text editor such as Notepad, TextEdit or Atom. 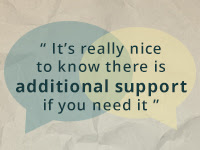 My name is Lois, and I’m one of your WSU Virtual Mentors.

My story is similar to many of yours…I put my university studies on hold for a bit while my children were young; as they got older, I had the time and motivation to complete my 4-year degree, but our frequent moves seemed like a road-block to me finishing up. During those years we were never in one location long enough for me to complete the couple years (at *one* university) that I needed to graduate, although I kept accumulating credits for work-related classes in various states. WSU’s Global Campus (then called the Distance Degree Program) was exactly what I needed! The online format allowed me to work on my degree through several moves (in WA, HI, and TX) and I graduated with much satisfaction in 2008.

Like the other VMs you’ve met in this series, I’ve continued to stay connected with WSU through the Virtual Mentor program. I know how grateful I was for an alternative to the brick-and-mortar pat…